In one of my previous posts, i mentioned about building a toy car project using Raspberry Pi as the brain and the LPC1114FN28 for low level control. This post describes in detail of this hobby project.

Basically, in this project, the Raspberry Pi (running a minimal version of Debian, not Rasbian) acts as a master that :

One question: why do not use the Pi to communicate directly with sensor or actuator ?. Although the Pi is a pretty performance system, it lacks some low level feature that we will need in this project, such as ADC for reading analog sensors, precise PWM hardware controller for motor control, etc. Therefore, i decided to used it along with the LPC chip that is more suitable for these low level stuffs.

So what features do we need for such a project ?

First, let talk about the interface between the PI and the LPC1114FN28:

Second, let take a closer look at the LPC1114FN28. Its main duty is to collect sensor data and control motors. Connecting to sensors are done by exposing all available GPIO and interface (e.g. I2C) as external connectors for future use in a specific application. To control motor, we need however a dedicated IC controller for this purpose. In this work we use the SN754410NE motor controller that allows to control up to 2 motors.

Last, since both devices can be powered using 3.3V supply (see this post to know how to do this on Raspberry Pi), we will need a voltage regulator to regulate input power from external battery to 3.3V supply. We will use the MCP1826S LDO voltage regulator for this purpose.

To sum up, this is the BOM (Bill of materials):

To design the schematic, it took me two days to learn to use KiCad, this is the schematic i finally came up with: 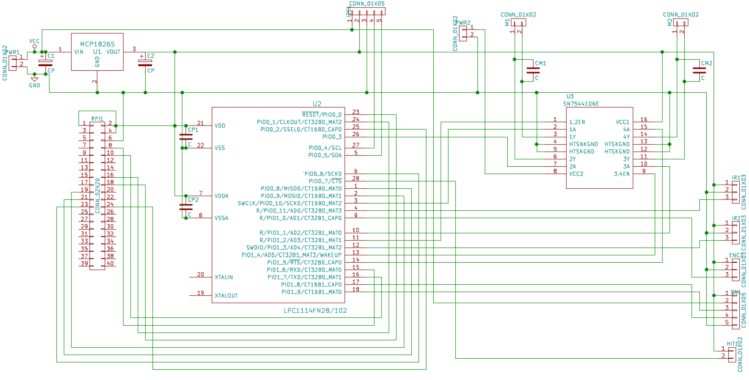 All available GPIOs and interface (e.g. I2C) are exposed as external connectors. These connectors are reserved for future use such as connecting to sensor (ADC, sonar, I2C sensors etc.)

After playing around with the PCBNew tools available in Kicad, i ended up with a two layers PCB design ready for production: 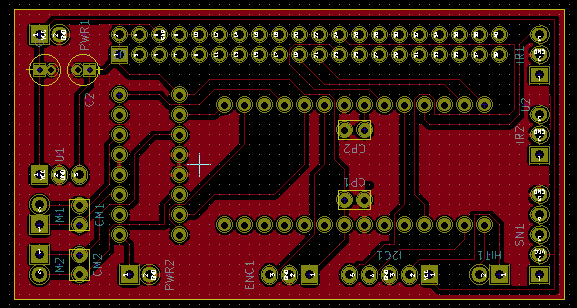 (First layer: The front of the PCB) 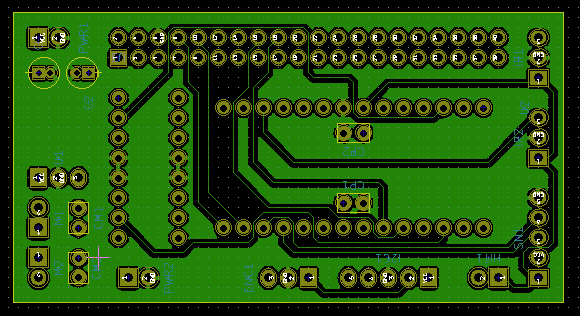 (Second layer: the back of the PCB)

Next step is to produce real PCB from the design, i've sent the design to a Chinese PCB Fab for production, the design is totally valid, no modification needed. The PCBs came two weeks later, here are two of them:

Assembly all the parts to the PCB require some soldering. The PCB fits well on top of the Rasberry Pi, this is the final toy car hardware ready for programming:

In this first prototype, i connect only one sonar sensor to the LPC chip via an external connector, further sensors can be easily added via these connectors. Further more, all available raspberry GPIOs are also exposed for future upgrade if needed.

Software development on such system involves two main parts: (1) firmware for the LPC chip and (2) user application on Rapsberry Pi. These two part communicates with each other via a common communication protocol. This protocol needs to be as general as possible so that change on each part doesn't break it. Basically, when the Pi need to read sensors data or need to control actuators (motor), it issues a command to the slave chip (LPC one). This latter then returns the data of sensor or performs the action on the real actuators. So, there are two possible implementation choices for this communication:

Although the first option seams simple to implement, it may lead to the timing problem when considering the interface we use. The SPI interface between the two devices are in full duplex mode, which means the transmission of data is in two directions simultaneously. That said, the Pi will immediately receives a returned byte when sending a byte to the slave. In the first option, a sensor read or actuator write operation is performed whenever there is a command from the master device, these operations introduce often a processing delay, which leads to the timing problem in SPI communication (e.g. the master receives junk data before the sensor data becomes available).

The second option avoids this problem by the use of a buffer, the master and slave communicate only via this buffer. When the master issues a command, it receives immediately the data stored in that buffer. This operation is often occasionally and can be implemented using hardware interrupt (SPI interrupt), while sensor reading and actuator control are performed frequently in the main loop of the slave.

In this case, the communication protocol is pretty simple: read from and write to the buffer. So we define a 3 bytes command (issued by the Pi) as follow

Base on this description, the protocol can be implemented as follow:

Firmware development on the LPC chip is previously described at this post, in this work, we will use the library available on my github repository

Then in the main function:

This implementation is used as base protocol for my future application on the programmable toy car. The source code (schematic, PCB, firmware example) can be found on my github page

The comment editor supports Markdown syntax. Your email is necessary to notify you of further updates on the discussion. It will be hidden from the public.
Powered by antd server, (c) 2017 - 2023 Dany LE. This site does not use cookie, but some third-party contents (e.g. Youtube, Twitter) may do.