Working on my DIY robot software (Jarvis) in headless mode, i came across a situation where i needed to monitor the system resource such as CPU, battery, memory, network and temperature to measure the "greedy" of my robotic application. Furthermore, as the robot was battery powered, battery safety was a real concern, so i needed something to monitor the battery and shutdown the system when the battery was low to protect it from falling bellow the usable voltage range.

So i've searched for an application/service that allows me to:

None of existing applications/services satisfy all of these requirements, especially, the battery monitoring feature. So i've decided to write a small service that i called sysmond.

sysmond is a simple service that monitors and collects system information such as battery, temperature, memory, CPU, and network usage. The service can be used as backend for applications that need to consult system status. Although it is a part of Jarvis ecosystem, sysmond is a generic service and can be easily adapted to other use cases. 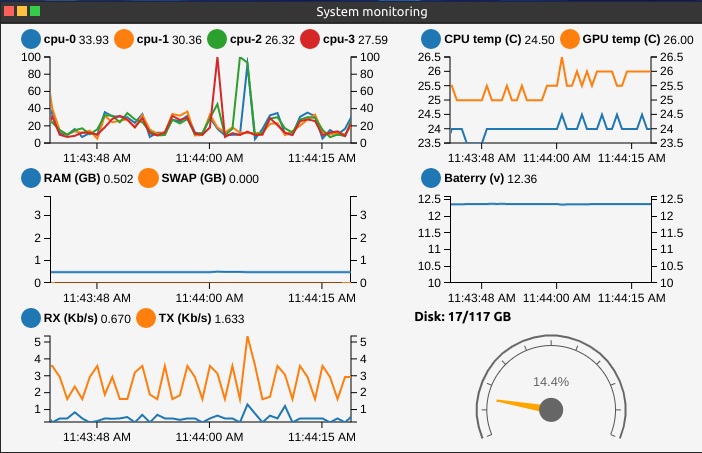 Example of AntOS web application that fetches data from sysmond and visualize it as real-time graphs on my Jarvis robot system. Detail on the use case can be found here

Sysmond monitors resource available on the system via the user space sysfs interface provided by the linux kernel.